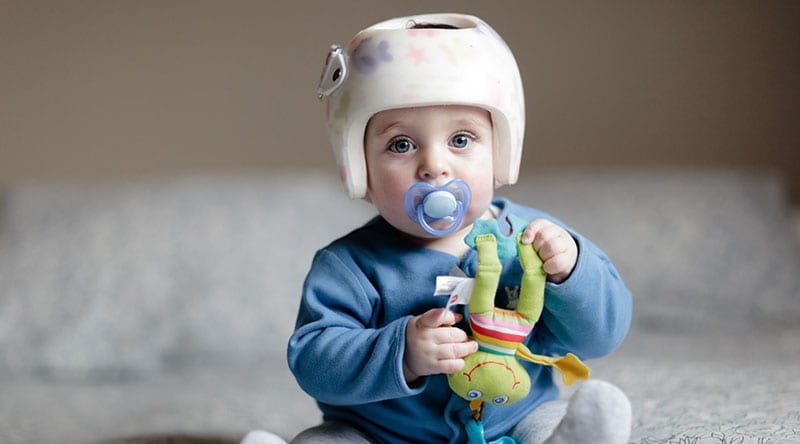 Plagiocephaly (a flattened skull on one side) or Brachycephaly (symmetrical flattening) affects approximately 20% of infants, and has become more common since parents and doctors started reacting to SIDS risks by placing babies on their backs for extended periods of time.

A common treatment for plagiocephaly or brachycephaly  in infants is “the helmet”—a padded head brace the child wears daily for several months.  Although this condition is considered “cosmetic,” craniofacial specialists routinely create custom helmets for babies with skull deformities in order to help the shape to return to normalcy. But does this treatment work?

According to a study published by the British Medical Journal (BMJ 2014;348:g2741), children with skull deformation were given either helmet therapy (23 hours a day for six months) or no therapy at all. After the end of the trial, children who did not receive a helmet fared equally well compared to those who did. The study concluded: “Based on the equal effectiveness of helmet therapy and skull deformation following its natural course, high prevalence of side effects, and high costs associated with helmet therapy, we discourage the use of a helmet as a standard treatment for healthy infants with moderate to severe skull deformation.”

However, since only about 25% of the infants fully recovered from the dysfunction, with or without a helmet, it is clear that prevention is paramount. Infants should be given as much opportunity as possible to move, roll over, and practice lifting their head on their tummies (“tummy time”). These practices strengthen the neck muscles and reduce the likelihood of indentations. Babywearing can also be a helpful alternative to riding in a stroller or car seat with limited head movement. Finally, even babies can benefit from chiropractic therapy, particularly around the head and neck. Birth trauma can lead to spine and nerve problems that contribute to skull deformation. When in doubt, stretch it out!